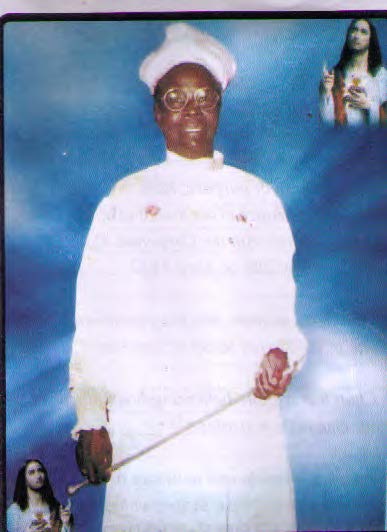 THE FOUNDER OF ANOINTED CHURCH OF CHRIST

Rev. Mother/Prophetess. R.A. Bellois was from a humble background in Onigbagbo village via Epe in Lagos State. She was born the sixth child of Josiah Igbaro Aiyekare and Juliana Abosede Aiyekare in 1921. She had little western education, in spite of her desire for it.

Mama, as we all lovingly call her, was born into the Anglican Church, while her husband Mr. Bellois was a member of the Catholic Church. While Mama lived in Kano with the husband, she got fascinated by the activities of a white garment church close by. She went into trance while attending a revival at the church and became a regular member of the church, before she moved back to Lagos with the husband.

Mama also lived in Warri and later moved to  Port Harcourt, where she became a member of The Eternal Sacred Order of Cherubim and Seraphim on Aggrey street.  Mama later moved back to Lagos in 1966 due to coup and counter coup, which led to the civil war in 1967. Mama became a member of The Church of The Lord at 3 Simpson street in Lagos as a prophetess. Mama was directed by the spirit to start a church in 1969, which is now known as The Anointed Church of Christ, Aladura.

Mama was a brave, courageous, meek and spiritually gifted woman, she founded the church of Christ praying band in the year of 1969. The church was later christened as “The Anointed Church of Christ Aladura” for the purpose of registration in 1982. Mama was able to quote passages from the bible during preaching and would boldly correct  if the wrong passage is read, as if she memorized the Bible. The only explanation, considering her minimal education, is tutorage of the Holy Spirit.

Before Mama departed, she stated that she saw the Pearly Gate open, in a vision, and Angels welcoming and congratulating her on a job well-done. She provided enough grounds for the continuity of the Anointed Church of Chris, Aladura, with (Reg. No 1953) of 28/04/82 by the Corporate Affairs Commission of Nigeria.

Mama departed for the beautiful shore on the 12th of January 1986 and was buried on February 2 1986, at our Ikotun Branch.