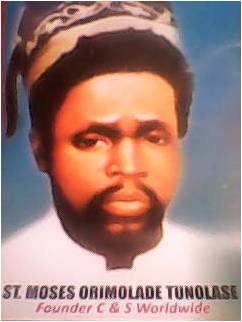 Moses Orimolade Tunolase was born approximately in 1879 into the royal family of Ayibiri in Ondo State of Nigeria. Orimolade, as a young boy, was often left for days at a time in the custody of the clergyman at this Church Missionary Society establishment of the Anglican Communion.  Moses Orimolade was a man of faith, charismatic leader, spiritual man, mysterious, and a genius. But Orimolade also had all the attributes that makes one truly human. He was a very humble man who hardly ever used the word "I" to describe himself. He maintained that God is the great and the only "I AM." He therefore preferred the nominative plural "we" implying the whole group,--male, female, old and young. He was an ascetic man and lived in celibacy all his life, although he sometimes kept female attendants. Orimolade was not only frugal, he was actually poor. It is true that early dissident members of the C & S charged that he was imposing fees for healing, yet members of the Advisory Board have strongly refuted this accusation, adding that the spiritual father refused even to accept free gifts for any kind of healing. H. A. Phillips cited several instances when Moses rejected gifts offered by those he healed. His poverty never tempted him to take advantage of his spiritual position to improve his lot economically. If he needed money he would without hesitation, ask for modest donations from his affluent followers. He never received money with his own hand. His "safe" was a space under his sleeping mat and his benefactors knew that was where to deposit money meant for him. If a member required financial assistance. Moses would happily direct such a member to the same place for whatever amount he needed.

All his life Orimolade slept on the floor on ordinary mats. At home, he was always clad in a white, handwoven loincloth and had an ordinary cane basket to store his few pieces of clothing. He wore his hair long and never had it shaved. When it became untidy his lieutenants advised him to cover it up with a cap, especially in public places and whenever there were visitors. This was to avoid embarrassment both to the public and to members of the society. Through William Onanuga (Orimolade's immediate successor), who specialized in making embroidery on caps, a few caps were provided for Moses. This had been cited as the origin of the practice of wearing caps, now one of the distinguishing marks of the C & S. It was also probably in imitation of him that the practice of wearing long hair began among C & S prophets.
Moses Orimolade addressed most of his followers as sons. He would say to every newcomer: "My son, what do you desire we do for you?" . He was impartial, always more interested in pacifying than in judging. He would call an offender and make peace at once between him and his accuser. Orimolade loved peace and feared contravening orders of the government and the norms of society.

Orimolade rarely prayed audibly except during general intercessions. He was given to meditation, such as is peculiar to yoga mystics. At the end of each of his usually long periods of meditation, the only visible evidence of which was an apparent look of absent-mindedness, he would heave a very deep sigh and to this all present would respond together: Iye (Salvation). He was called Baba Aladura, not as a title originally, but as a nickname before the C & S was organized. The Advisory Board therefore takes a very serious objection to anybody parading as Baba Aladura.

With the founding of the C & S in June 1925, Orimolade seemed to have realized the consummation of his evangelistic aspirations. From then on till his death on October 19, 1933 at only fifty-four, he remained in the background, allowing his youthful and socially more presentable followers to popularize the society. He stayed at home to attend to visitors who called for prayers and healing. He continued, however to appear in public on anniversaries and during processions, when he rode in a wheelchair behind the procession. The years 1925 to 1927 were for Moses Orimolade years of glory. They were years of expansion for the C & S, a new radically and spiritually dynamic movement. During this time evangelists of the movement visited almost all parts of Yorubaland to preach and to establish branches. The north was also widely evangelized and effective inroads were made by his preachers.

In his last days, Orimolade, in spite of the rebellion of his close followers, remained a cool-headed father of the society. He made an effort to re-unite the dissident groups into one strong, dynamic society, but his unwilling associates thwarted all his moves for peace.